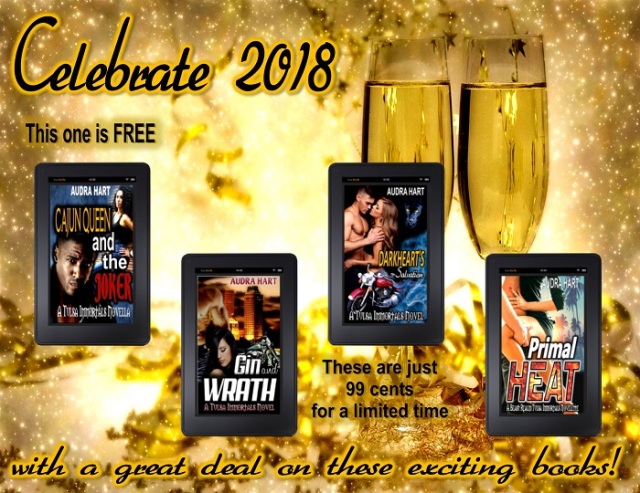 Book 1 – Cajun Queen and the Joker by Audra Hart

This 400 page novel is Just 99 cents for a limited time!
FREE to read with KINDLE UNLIMITED!

This action packed tale is filled with magick, danger, touching connections, and enough sexiness to put some serious sizzle in your kindle.
This novel is the vastly expand version of the short story.
The moment their eyes meet, Silas KNOWS Valentina is his mate, but she turns and literally runs right into the arms of a killer! Of course, our hero saves his lady, but the threat persists.  He works tirelessly to keep her safe while she finds a safe haven with the Twin Ravens MC.  While apart, this fated couple forge an unbreakable connection through the magick of the dreamscape.

Once reunited, the couple explore the magick of Others and learn there’s much more to Valentina than anyone imagined.  When an old threat reemerges, an unlikely band of heroes step up to help Silas and Tina save the day.

One reviewer had this to say about Silas Darkheart: Silas is so utterly Alpha male where Tina is concerned (Mine, keep, hold, protect) and Tina feels the connection but is so wary because this is a whole new world to her. It is far from easy for them, but where love is concerned it never is.
Darkheart’s Salvation

Just 99 cents for a limited time!

Read this for FREE with your KINDLE UNLIMITED subscription!
Universal Link: http://getbook.at/Darkheart