Now is the time to pre-order your copy of

TWIST OF TIME before the price goes up to $3.99 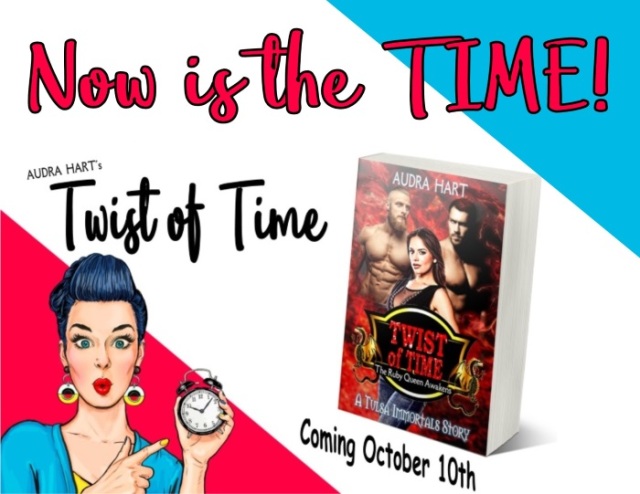 by Audra Hart
Book 7 of the Tulsa Immortals Series will blow your socks off!
Pre-Order your copy today of this 5 Alarm HOT MMF Ménage Paranormal Romance!

SAVAGELY ATTACKED BY A VAMPIRE AND LEFT FOR DEAD!
Once rescued by Immortal Enforcers of the Twin Ravens MC, Callie awakens to find herself embroiled in a secret world of supernatural danger and intrigue. Magick and the protective support of her saviors soon see her recovered but can Callie rebuild her shattered life? Weeks later, she finds herself irresistibly drawn to two newcomers… yep, two men! What’s a girl to do with that?
TWO LONG LOST PROTECTORS RETURN TO THE MC, THROWING CALLIE INTO A TAILSPIN!
Kazar is a damaged but ancient vampire who wields unimaginable powers, while headstrong and impulsive Nyle is one of the strongest wolf shifters of his generation. They have loved each other for decades, but lost one another years ago. So, why has Destiny suddenly thrown Callie into their path just as they find each other again?
THE POWERS THAT BE KNEW EXACTLY WHAT THEY WERE DOING WHEN THEY FORGED THIS MAGICKAL UNION OF THREE SOULS!
An explosive attack on the MC compound changes everything, thrusting Callie into the protective arms of her vampire and wolf because a crazed goddess wants her dead. Visions of past lives awaken her hidden inner beast, while Nyle and Kazar gain new power enabling our Triad of Lovers to accept the path laid out before them.
CAN THESE THREE SOULS TRULY UNITE TO DEFEAT EVIL?
If you enjoy hot and sexy romantic tales about vampires, shifters, dragons and a deadly, ancient goddess hell bent on unleashing Anarchy, you will love Twist of Time by Audra Hart.
Sizzle Alert – this story contains one seriously hawt M/M/F (Bisexual Ménage) adventure with lots of over the top fun and fantasy action. Join Audra’s bad-a$$ heroine in a tale filled with snarky humor, sometimes explicit and often kinda kinky sexy times, a bit of filthy language, and enough plot twists to give a reader vertigo.