The Summertime Sizzle Event is winding down.

Act now!  Most of these books will be going back to their regular prices very soon.

Joker’s former lover, a sexy Cajun Queen from New Orleans has brought supernatural trouble to Tulsa. Can Jenniene and Joker find their way back to each other or will the Ghouls take over at the Twin Ravens MC on All Hallows Eve?

Darkheart’s Valentine – Twin Ravens MC
A Tulsa Immortals Story – Book 4 by Audra Hart
Twin Ravens enforcer Silas Darkheart discovers his mate, Valentina “Tina” Moretti, during a ceremonial dance honoring his Chickasaw shifter guardian heritage. The moment Tina recognizes his “otherness” she flees directly into the arms of a killer. Silas rescues his fated mate, they begin to forge their mating bond in their dreams but threats once again loom, leaving Tina to play rescuer.
Will the Catamount and his Valentine triumph to claim their destiny in the light of day?

If you are a fan of the Beast Realm Trilogy or just love kinky fun and adrenaline injected romance, you will love Primal Heat!
Join the leaders of the Beast Realm for a HOT and KINKY tropical island getaway before things begin to heat up once again in Tulsa with Twist of Time.

Buy your copy on Amazon for just 99 cents
https://getbook.at/PrimalHeat
Or get it FREE here: https://claims.prolificworks.com/free/v13I2GGd 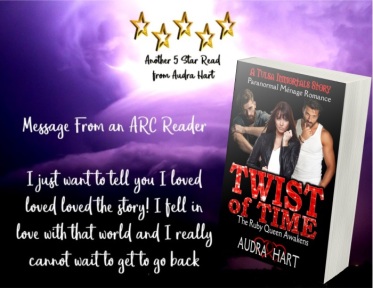 Left for dead in alley but Destiny intervenes! After being rescued by the Twin Ravens MC, Callie Boyd falls head over heels for two immortal enforcers, a sexy ancient vampire and a powerful wolf shifter. But these two sexy supernatural bikers are already involved… with each other. Callie soon learns these males are her fated mates, and Destiny has an epic plan for all three of them.

An explosive attack on the Twin Ravens MC sends Callie into hiding with her mates until she is ready to face the supernatural villains who want her dead and gone! Armed with visions of her past lives and her growing bond with her two lovers, Callie embraces her destiny and all three are transformed to confront Anarchy and pave the way for a new, majestic dynasty.

FREE to read with Kindle Unlimited

A sweet and spicy, insta-love romance, between a fallen goddess and a “ghost” wolf shifter.

Smoke – After a battle with vampires, I woke up at the MC. One problem, no one could see me or hear me. And they were all talkin’ about avenging my death.
Yeah, it sucks to be a ghost.

Six months later, a walking wet dream in pink riding leathers makes my wolf wake up to growl “Mine!”

Yeah, I gotta agree with my snarly inner beast. Now what?

Shadow – I call myself a Road Witch, but in truth, I am fallen goddess from a long forgotten pantheon. After enduring an endless cycle of life, death and rebirth I find I am sick of it all. Nothing but a soulmate can free me from this unending torment, and those are in short supply. Believe me, I know because I have searched for thousands of years!

Feeling apathetic and reckless is a bad combination if you want to stay alive in the world of supernaturals. Luckily for me, I have been drawn back to my friends at the Twin Ravens MC, where I am floored to discover the answer to my prayers – my soulmate!

One tiny little problem, his soul has been ripped from his body and he thinks he’s a ghost. Now, if we can just sort out this whole dead/undead thing and deal with a savage killer from my past we might just have a shot at a happily ever after!

Find ALL the TULSA IMORTALS adventures on their Amazon author page: