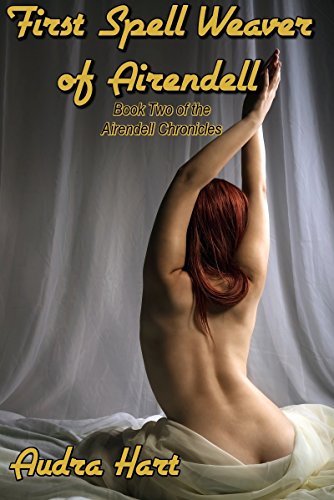 In Book Two of this Trilogy you will read a Story of Passion, Retribution and the Dawning of a new Dynasty.

THE VILE CURSE IS UNDONE
Morna Glynn Michaels, a former warrior and powerful Spell Weaver has been created anew and joyfully reunited with her one true mate, a centuries old Spell Weaver and Vampire. This startling change in Morna causes her bond with her mate to strengthen after centuries of being tempered by the fires of suffering. Their precious eternal love grows ever more passionate and blossoms into a thing of rare beauty.

A NEW LEADER EMERGES
The most powerful FIRST SPELL WEAVER ever arises from the sorrows of bitter loss and broken dreams to ably take on the mantle of leadership, with Lucian, her stalwart vampire mate, at her side. Dark forces do everything possible to destroy their new found unity of purpose. Will Airendell emerge unscathed? Can Lucian and Morna’s love survive and flourish as evil abounds on all fronts?
There are 3 installments in the action packed romantic saga of Lucian and Morna Michaels, each sexy and exciting tale is available at Amazon.

Luca, the magical vampire who stands over six and half feet tall, watches over his mate’s inert form.  He is watching her intently, his great love for her obvious in his face.  His pain is also plain for all to see.  Then he looks up at the doorway the young vampire had made his escape through.  Luca knows how much of struggle it was for the young vampire to be around Morna as she bled profusely before being mostly healed.

Damian, the young vamp, had sworn to protect Morna and it made him feel worthless to see her injured like this. That and the raging blood-lust the young vamp had to cope with is certainly enough to force him out to hunt.  If Luca had not had centuries of learning to cope his with his own need to feed on humans he too would have been forced to go hunt.  But his own sense of failure and anger at his mate keep him at her side, for the time being.

Luca shakes his head in frustration.  Morna simply allowed Aideen, their daughter, to beat her.  Luca fears Aideen would have killed his beloved if Damian had not caught up to them when he did.  He looks back to the woman he loves.  He rubs his face with his hands and rake his fingers through his hair, and sighs.  “I am taking her to our quarters, if you don’t think it will hurt her if I move her.”

“I am sure she can be moved, Luca, she is well on her way to healing. The medication will hopefully help her rest for a few hours.” assures Elias, then he turns and walks away.  He knows Luca will look after her from here on out.

Rinda finally moves away from Morna’s side after patting Luca’s shoulder. Luca nods his thanks to his wife’s favorite godson and her best friend before picking her up and carrying her to their quarters and lies her on their bed.  He kneels beside the bed holding her hand.  He buries his face in the bed and his body is wracked with dry sobs. He has never felt so helpless, so angry in his entire life. He is angry at his daughter for beating his wife, and he is angry at his wife for preventing his intervention and for allowing Aideen to beat her.  But mostly he is angry with himself for not raising their daughter better.  Why did Aideen do this?  I can’t believe she acted out of jealousy.  There has to be more going on than that.

He raises his head when he feels Morna move on the bed.  “Stop it Luca.  None of this your fault.  I told you things are funny with women.” she whispers.  “Come up here and lie with me, please.  I will be much better after a few hours of rest.”

Luca stands up, their eyes meet.  “Dammit woman, am I supposed to just accept what just happened because you say things are funny with women?” he snaps, the ire on his face plain to see.  “Am I supposed to pretend that I am not so angry with both of you, that I just want to walk away?”

Morna flinches at his words.  “I am sorry Luca, but she was right, I am not much of a mother to her.  I never have been.  And I certainly wasn’t going to risk hurting her.  So I just let her do what she wanted.”

Morna flinches at the accusation plain in his words and tone but she doesn’t respond.  Luca turns on his heels and walks out of their quarters.  Morna hears him ask Brigid to keep an eye on her, then she can hear him no more.  She knows he has left.  She’s not sure if he went out into the upper-world or down into middle-world.  But she knows he will probably be gone for a long time, if not forever.  I wouldn’t blame him if he never forgave me for this.  I let him down.  I let everyone down.

Grief and shame over her stupidity and inadequacy wash over her unrelentingly.  Silent tears roll down her cheeks as the medication and the concussion draw her under again.  Shortly after she falls asleep Morna feels Rinda crawl into bed beside her and gently pull her injured body into her arms.  Rinda softly sings the healing songs and other songs to help Morna rest more easily.

After nearly six hundred years of surviving thirteen reincarnations and subsequent deaths Morna had once again found herself again in the arms of her beloved and her one true mate, Lucian Michaels.  The sexy as sin Spell Weaver turned vampire has been formally mated to Morna since 1316.  He’s a powerful magical being who has kept watch over Morna through all of her past lives and recently reunited Morna with her sister and friends from Airendell.  His love and his magic have sustained her through countless countless trials and heartbreaks but Morna’s own failure to protect herself has caused Luca more frustration than he could deal with so he walked away.

Recent battles with enemies have left Morna’s body struggling to heal despite her partial change into a vampire.  Her broken heart over being attacked by her own child and the subsequent departure of her mate have left her feeling alone, unworthy and ripe for dreams full of recriminations and self-doubt.